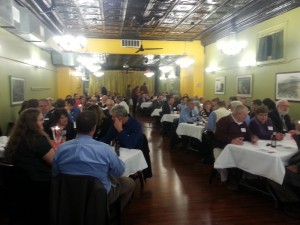 The program began with an overview of the past year WCOED efforts and accomplishments from Executive Director Greg Moon. Moon noted accomplishments such as the securing of a $9,750 AEP Ohio LEAP grant to enhance the marketability of a local development site, and the obtainment of a $1.5 million grant from the U.S. Economic Development Administration; the largest grant the WCOED has ever acquired. He also covered metrics from projects the WCOED had been integrally involved in over the last year including an attraction and an expansion project of two manufacturers. These resulted in the commitment of 90 new full-time jobs created, 585 existing jobs retained, $21.1 million in new capital investment, and $1.66 million in grant funds secured. Moon’s presentation can be accessed HERE.

The keynote address was delivered by speaker Mark Barbash. Barbash is the Executive Vice President of Strategic Investments for the Finance Fund; a mission-based non-profit focusing on providing capital for community and economic development projects throughout Ohio. His past positions include over 30 years of experience in the field of Economic Development and an appointment leading the former Ohio Department of Development. Barbash offered attendees a glimpse at the economic recovery in Ohio, and primarily focused on the top 10 practices that a successful economic development organization should be employ. Barbash’s presentation can be accessed HERE.

A special thanks to our Platinum Members:
© Copyright 2014-2022 Wyandot County Office of Economic Development, Inc.