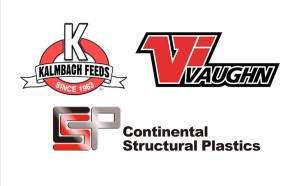 County Distinguished Contribution to Economic Development Awards’ at the organization’s Annual Meeting this past Monday evening. The award honors an individual or entity that, in the opinion of the WCOED executive officers, has made a significant contribution to advance the economic viability of Wyandot County. This contribution may be in the form of an investment, assistance, or services provided.

The recipients were awarded a plaque for display at their place of business, and will be added to a comprehensive plaque of award winners that will be displayed in the Wyandot County Courthouse. On Monday Greg Moon, WCOED Executive Director, and Kurt Kimmel, 2014 WCOED President, presented the three local companies below with the award. The awardees were also provided a congratulatory proclamation from U.S. Senator Rob Portman for their local investments.

Outside of this project, in November 2013 Kalmbach Feeds also opened its own Compressed Natural Gas filling station that is open to the public. The station supports the company’s new dedicated CNG and dual-fuel feed distribution trucks, and will support its entire fleet that will be converted to all dedicated or dual-fuel CNG trucks within the next few years.

Continental Structural Plastics
Mike Ellerbrock, Plant Controller, and Jeff Gessner, Production Manager, of Continental Structural Plastics accepted the WCOED award on behalf of the CSP facility in the Village of Carey. CSP has long been among the top three employers in Wyandot County, and a great asset of the Village of Carey. This year CSP announced a local expansion project that would not only add to the plant’s in-house capabilities, but create at least 50 new full-time jobs and involve over $18 million of capital investment. The company is currently adding 50,000 sq. ft. to its production facility for the installation of a new paint system. The new paint system will provide the Carey plant with the ability to service additional clients and continue to positively affect the Wyandot County economy.

Vaughn Industries
The last Distinguished Contribution to Economic Development Award was presented to Tim Vaughn, CEO of Vaughn Industries; a company that has been a good steward to the Village of Carey and the larger Wyandot County community for over 50 years. Over the past year Vaughn Industries made a significant investment with the intent of ultimately benefiting the local community.

The company remediated parcels in the Village of Carey containing abandoned structures to add to adjacent land it already owned, and ultimately create the new Arrowhead Commerce Park; Wyandot County’s second industrial park. Recognizing the need to attract industry to the area, Vaughn Industries went another step further and constructed a 100,000 sq. ft. speculative building within the park.

Over this past year, the company has worked to establish needed infrastructure in the area as well including burying over 1400’ of 24” tile, investing in Columbia Gas’ infrastructure to bring lines into the park, and working with the Village of Carey to supply sewer and enhanced water service. Vaughn Industries is also a charter member of the WCOED. Mr. Vaughn was a guiding force when the original Business Retention & Expansion effort was started in Wyandot County, which blossomed into the creation of the WCOED.

A special thanks to our Platinum Members:
© Copyright 2014-2022 Wyandot County Office of Economic Development, Inc.