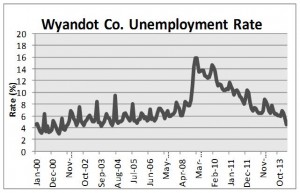 The unemployment rate recently released for May shows a continued slight decrease at 4.3%.

While these numbers are overall a positive representation of the local economy and that of the state, it is important to analyze the figures involved in calculating the rate. In Wyandot County, the total civilian labor force decreased from 10,900 in March to 10,800 in April. A decrease in the local labor force is not necessarily a good statistic. The number of individuals unemployed also dropped from 600 to 500 resulting in the drop in unemployment rate. A drop in the number of unemployed could also be attributed to negative factors such as individuals who are no longer actively seeking employment.

For more information on the calculation of Ohio’s unemployment
rates, visit: http://ohiolmi.com/